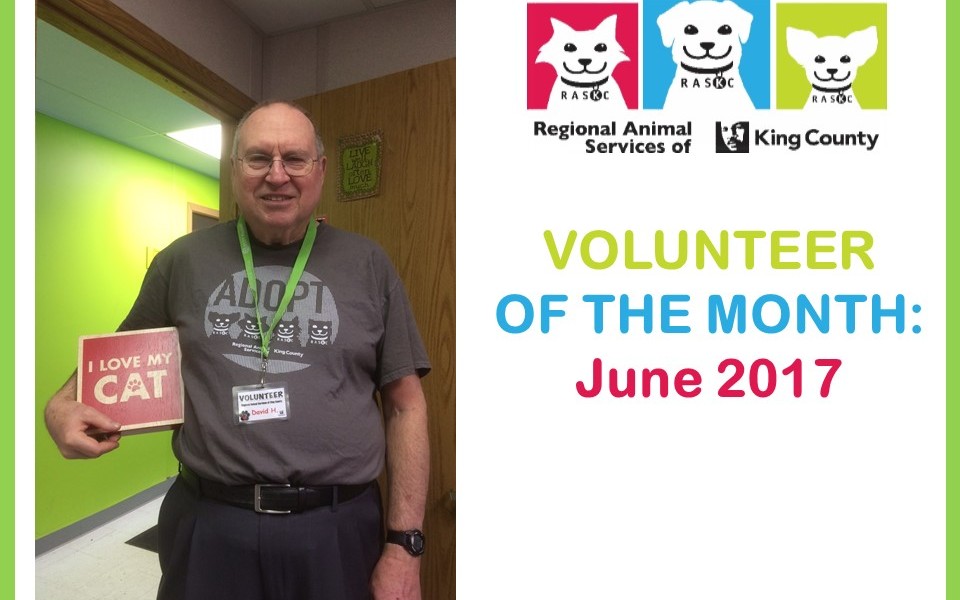 Meet David! David Howerton has impressed so many RASKC staff, volunteers, and customers with his amazing dedication and gentle disposition. While a great many RASKC volunteers are extraordinarily dedicated, not many can match the number of hours and shifts that David has contributed in a relatively brief period of time. From the time that he started seven months ago as a Cat Meet and Greet volunteer, he has worked more than 412 hours over 190 shifts. While this includes the time he has contributed with RASKC pet visits to a local retirement home, it does not include additional foster hours that he has given. Simply amazing. Not only is David extremely generous with his time, his affable and helpful nature makes everyone want to spend more time with him. Thank you, David!

Q: How did you hear about RASKC?

A: I came down last fall to do what I did in 1991 when I adopted a cat. I discovered that the shelter is a far different place than what it was 26 years ago. So I decided to volunteer.

Q: What made you want to volunteer, especially to work with animals?

A:  I’ve always liked animals. I’ve had cats or a dog most of my life. Now that I’m retired, I like to spend my time being useful.

Q: What do you do when you aren’t volunteering at RASKC?

A: I walk four to eight miles every day.  In the summers I volunteer full time at Mount Rainer as a “Meadow Rover.” I hike, talk with people, handout maps, and educate other hikers about the mountain.

Q: What have you gained and hope to gain from your experience as a volunteer with RASKC?

A: To help animals and stay busy.

Q: Describe your cats at home.

A: I’ve had cats for the past quarter of a century or so. I fostered cats over a decade with the Equal Animal Rights Society. It’s now called the Evergreen Animal Rescue Society. When my own cat died after 21 years and nine months, I decided to adopt an older cat. I also began fostering for RASKC.

Q: What is the best advice you would give people who want pets?

A: Come on down to RASKC to adopt! Try to know what you’re doing before you adopt. Make sure you have the time availability to match your pets’ needs. Cats have a hard time adjusting to new circumstances, so be patient with any cat you’ve just adopted.

Q: Describe a memorable moment you’ve had with an animal.

A: Many years ago, I used to take long bike rides. One time when I was biking through Yellowstone on my way across the country, I was suddenly charged upon by an elk with very large antlers. Thank goodness those antlers slowed him down enough so that he couldn’t catch up with my high-adrenaline pedaling. Another time I was bicycling from here to Alaska. When I arrived, I was biking down a highway when some line workers frantically waved me over. I wondered why they wanted me to pull over. They pointed out an enormous grizzly bear right behind the edge of a nearby fence. Had I continued down the lane in that road, I would’ve been that bear’s lunch!

Q: You’ve mentioned that you have a disability called prosopagnosia. That’s one of the characteristics that you and actor Brad Pitt have in common. Would you like to share a little bit about that with RASKC readers?

A: I have a hard time recognizing faces, even faces that are very familiar to me. Jane Goodall, who also has it,  was the first person I ever heard of speak ofprosopagnosia – what I had been dealing with for so many years. On one hand, it doesn’t afflict me too much, since we don’t have a lot of frequent repeat customers at RASKC. On the other hand, sometimes I don’t always recognize staff or volunteers or their spouses whom I have worked with quite a bit.

Volunteer of the Month