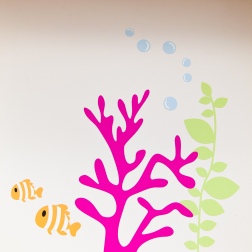 Celebrating April’s Volunteer Appreciation, our Nickie Ford — Adoption Events Coordinator — submitted this story to highlight the Eastside Pet Adoption Center’s cat colony room that has been recently transformed into a “cat aquarium”, thanks to the spectacularly talented work of RASKC volunteer, Lara Steele.

Despite the best efforts of volunteers and staff to socialize with our cats and improve their time at the shelter, it can still be difficult to watch them spend day after day inside a kennel. A colony room – a space in which multiple cats are able to roam free – provides one solution to this problem. Thanks to some especially creative volunteers at our Eastside Pet Adoption Center in the Kirkland Petco, cats here are now getting a well-deserved break from their kennels.

The idea behind providing more colony rooms for our cats had been floating around RASKC for a while. We already have one colony room in the cat adoptions building, and it has proved to be a great alternative for cats who are sometimes difficult to handle. However, my interest in colony rooms really peaked when I became part of a team working to bring down the number of Upper Respiratory Infection cases in our cat population. We were specifically looking at why these cats were getting sick. In the end, it seemed that stress was one of the largest factors.

I learned that colony rooms can both enrich the lives of shelter cats and also decrease their stress levels, which can ultimately help reduce the number of cats getting sick. But the rooms have another huge benefit. Cats in colony rooms often get adopted faster, since adopters get to see a different side of the cat’s personality in an open room versus a kennel.

At our Eastside Pet Adoption Center, I noticed we had an extra room that was rarely being used. I  was eager to alter this space for the cats, motivated by the idea that a colony room would not only enrich their lives while they are with us, but also help get them into their forever homes faster. We placed several cat trees and toys in the empty room, but it felt far from complete. Eventually one of our awesome volunteers, Lara Steele, generously offered to build a custom cat tree for the room. Her ideas for the cat tree grew bigger and bigger, until eventually her plan turned into a huge structure for the entire room! 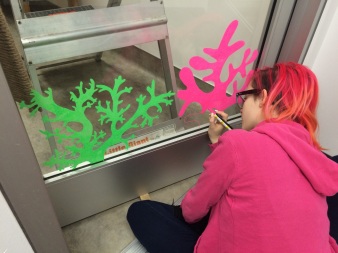 I cannot say enough about how extraordinary Lara has been throughout this process. Her design for the structure in the room was clever and creative. It provides great vertical space for the cats, while also offering plenty of places to play and hide. She even included fish and mermaid details in her design to go along with our “cat aquarium” theme. Lara dedicated countless hours to this project and it was clear that she was passionate about providing something truly amazing for these cats. We cannot thank Lara enough for all of the time and hard work she has donated – this would not have been possible without her!

I would also like to give a huge shout out to some of the other amazing volunteers who contributed to this project! Thank you to Shawn Steele, Nikita Steele and Leslie Whitaker, who assisted with design and construction. Thanks also to Pia and Freja Gerholt, who helped with sanding and painting, and Madi Cagle, who completed all of the window artwork.

I feel so lucky to work for an organization like RASKC where ideas like this can be realized. It is an incredible experience to work alongside both staff and volunteers who all share one very valuable goal – to better the lives of the animals. 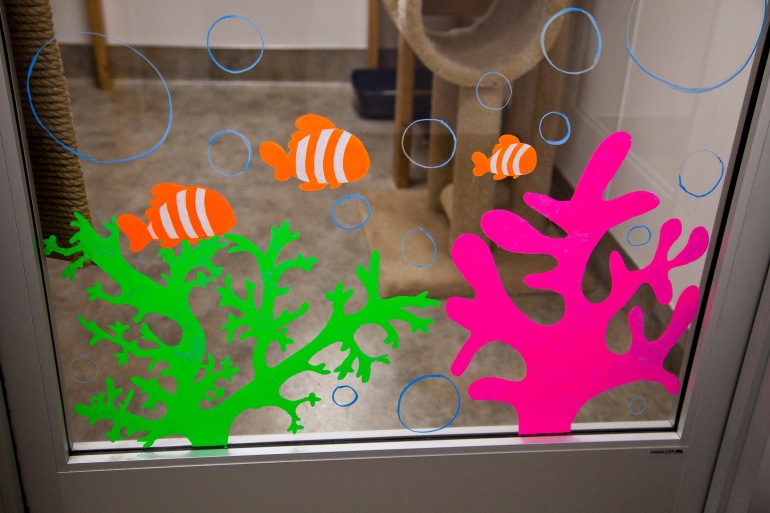 How about a heartwarming #RASKCHappyTails story on a chilly Monday? This comes from Denise:
We're singing the praises of Figaro on this #Caturday! K and C shared a #RASKCHappyTails update:
Loading Comments...
%d bloggers like this: