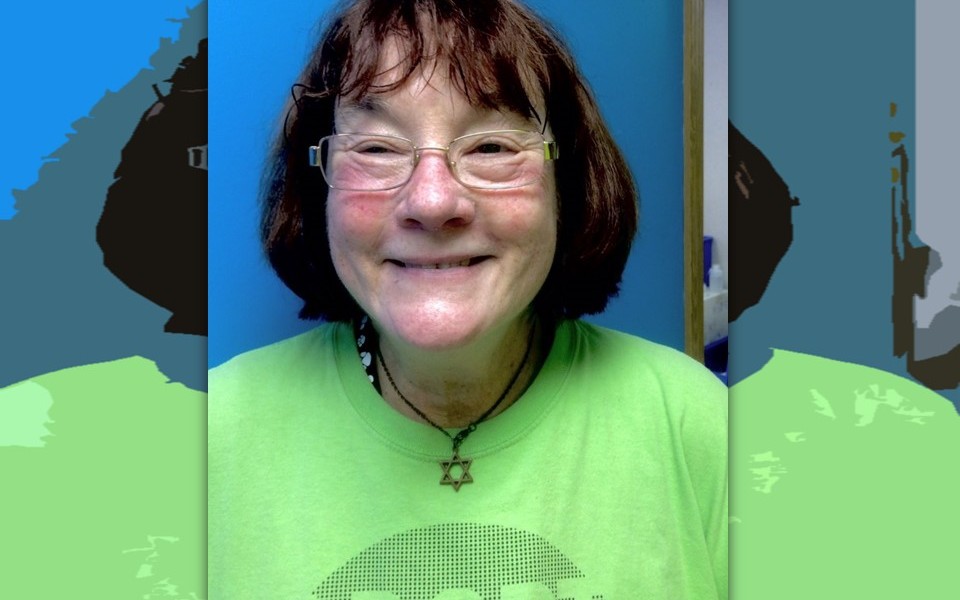 Read our Q&A with her below:

Q. How did you hear about RASKC?

A:I heard about it from a woman who also volunteered for Federal Way Communities in School. Then looked up online and signed up for orientation class to learn more.

Q. What made you want to volunteer, especially to work with animals?

A:I have always had dogs in my life since childhood.. Then my children added cats and small rodents as they grew up. I had a bucket list for my retirement that included volunteering since had a much more flexible schedule. My basic nature is as a care giver so helping with animals fit into that.

Q. What do you do when you are not volunteering at RASKC?

A:I like to read especially mystery and action novels. I enjoy going to the movies to see everything from “chick flicks” to action films. I enjoy traveling recently have been exploring western Washington. I volunteer as a mentor in the Federal Way Communities in School over the past two years. I am pursuing my more artistic side by drawing and soon to take a painting class.

Q. What do you hope to gain from your experience as a volunteer with RASKC?

A:I hope to be able to share skills learned as a Nurse Case Manager and Toyoto system user with RASKC. I have unexpectedly become comfortable with cats and now think of my self as an animal, not just a dog, person.

Q. What is your life motto?

A: Be kind, grow stronger and always be open to love.

Q. What is your favorite activity to do with your dog?

A: My little dog, Ruby, and I love to travel to new places with our girlfriend Liz. We have gone to Oregon, Lavender Festival, Tulip Festival, Moclips, Mount Rainier, just to name a few.

Q. What is your favorite thing about cats?

A: I do not have my own cat any more but live with one who is my son and daughter-n-laws “child”. His name is Cholo which I am told means little Bandit. He is a “Munchkin” with very short legs on a full sized cat body, long fluffy hair, and the biggest blue eyes. He is always trying to sneak past the dog to get in my room, sit on my desk, and watch the birds a feeders outside the window. Of course the dog thinks my room is her private territory so some interesting situations arise.

Q. How would you describe your dogs personality?

A: Ruby is a “Love Sponge” She follows me everywhere and wants to cuddle all day/night long. Her breed is not described as watchdog material but do not tell her that. She thinks anything like a large animal on TV and the neighbors big engine muscle car must be announced with lots of fan fare.

Q. What is the best advice you would give people who want pets?

A: A pet is a commitment of many years. Be sure your personality and life are a match to your pets energy level and personality. Remember older animals need love, caring, and can be a great companion too.

Q. Describe a memorable moment you’ve had with an animal?

A:I have had so many but here are three:
My first dog as an adult was Lobo, a German Shepard/Chow mix. When I was pregnant with my second child and the dog was 7 years old I had to take him to obedience classes. I was too pregnant to chase him all over the yard or be pulled when walking. The woman teaching the class said he would never learn as too old. She had a miniature poodle that was trained so strictly it was like a circus show she put on each week. She had us doing walk control, on and off leash, staying, coming, etc. Lobo was doing great with all the instruction. He did not allow his back end to be touched from the first day I got him from the pound. So when she wanted us to change the command from stay with automatic sit to stay but stand til told to sit he was confused, I warned her to not touch his back end but twice she put her foot under his tail to prevent his sitting and he nearly bit her. I was trying not to laugh and so were other members of the class. The instructor thought she knew better than any of us about dogs. Lobo developed Heart Worms and had to be treated so did not finish the class. However the class members voted him the most improved dog at end of the course and he got his graduation diploma anyway..

My last big dog and the dog I will miss the rest of my life life was Packee, a German Shepard/Rotweiller mix. She came to me from a home where no one was in charge of the dog so she thought she was the boss. One afternoon my grand children’s young German Shepard pup was over at my house. The pup was running around like a crazy dog. He hit the back of my knee and I yelped in surprise. Packee came from far end of yard at a dead run. She grabbed the pup by the neck, pinned him to the ground for about 10 seconds and gently growled. She then let him go and they returned to playing. The pup again ran up behind me clipping my knee and nearly making me fall. Packee ran up, grabbed pup by neck, repined him to ground with mouth closed tighter around neck and growled longer as well as deeper then let him up again. He later ran up toward me again but threw on brakes and stopped about a foot from me and looked in Packee’s direction. She was always my protector and let me think I was the Alpha dog even thought I knew the truth.

My current dog, Ruby, did her usual good morning greeting by putting her nose to my face. This time however it was different. She sniffed my breath, wrinkled her snout and had a small “Phhht” sound come out her nose. Then she turned her head to the side and actually gagged! It was like a well honed comedy routine!

Learn more about RASKC’s Volunteer Program by visiting us at: www.kingcounty.gov/RASKCvolunteer

Volunteer of the Month

Can you believe Gelato is still available? Come see this handsome boy at the Pet Adoption Center today! kingcounty.gov/AdoptAPet
Our apologies to Caitlin! Her #RASKCHappyTails submission got stuck somewhere in those "internet tubes" and we just uncovered it! Here's what she had to say:
%d bloggers like this: